Starbucks & how I nearly died!

Yes, ashamed, but I am at Starbucks, I am waiting for Claire while she tutors. I just paid €2,95 or $3.92 for a tall Earl Grey Tea, whew, that's steep! But at least it will give me a chance to share my near death experience from the weekend.

Alright, so i had met American on my plane from Atlanta, more later, named Chris. He was meeting up with some friends from the states in paris and on Saturday night, they invited Brandon and me to make a picnic at the Eiffel Tower for dinner. We agreed, and headed out. Well, Brandon is wearing a hoodie and a tshirt and I am a bit more prepared with a hoodie, wool sweater, leather jacket, scarf and jeans. But still, not really winter weather stuff.

Well, we head outside and the temperature is dropping like crazy. We still go, Brandon buys along sleeve I love Paris shirt, and we sit down to eat. Well, two hours later, obviously, we're freezing. Brandon probably more than me, but I have a fever so I am dying. I am so cold, I literally eat nothing.

Hours later, we walk around, can't get into any clubs because it's me and four guys, we use the bathroom at McDonald's, the guys eat some Crepes, and finally we make it to an Irish pub. Warm! Yes!

Anyway, finally, around two we head out. The metro is closed so Brandon and I start to walk but eventually catch a cab. Now it's three, we aren't tired so we check out the hostel bar, which is hopping with weird people dancing, we watch them for a while and then decide to call it a night, at this point it's about four am. We are trying to wake up around 8:30am to go climb Notre Dame. I don't change and climb into my top bunk of our twelve bed hostel. His bed is below mine. I am wearing super tight pants, so I peel those off and fall asleep.

I wake up at 7:30, upset because I know that I need to sleep more, but can't so I guess I'll just wait for Brandon to wake up. I don't want to squeeze back into my pants, so I am hoping that he will wake up and throw me some shorts.

No such luck, his alarm rings and he sleeps right through it. Meanwhile, I feel terrible, like awful, really bad. I have a super high fever, and I cannot breathe because my nose is so stuffed. I have no tissues, but, praise the lord, I am wearing socks. I peel those off my feet and use them to blow my nose. Gross, but seriously, I am already like death, so I really don't care.

I try calling out to Brandon, wow that sounds needy, ha, and texting him, nothing.... He sleeps on.

At this point, I decide that if I can get to the shower, it'll be good. I, by some act of god, get my pants on, climb down the ladder, grab some clothes and make it to the shower.

I get wet, drink some of the shower water, it was nasty, and then I start to feel even worse.

And then all of a sudden, I start to shake really, really bad. Like im convulsing. I'm thinking that im going to pass out. Its like a csi episode where they find a body... My imagination is running wild like usual.

My next thought is how long is it going to take Brandon to find me passed out in a locked shower in the ladies bathroom. Thankfully, I manage to dry myself off, put some clothes on, and make it back to our room.

At this point, I am barely functioning. I sit on the floor, also kinda of gross, but literally, I can't move, think, whatever. I think that I must be having a hypoglycemic attack, but never has anything like this happened before.

I usually keep nuts in my bag and we have some smashed strawberries left over from the night before, but I am so nauseous I don't want to eat anything, and the idea of throwing up while how I was already feeling was almost not worth eating something to see if it could stop the shaking. Plus the strawberries are like three feet from me.... Oh the horror!

I make it to the strawberries. I suck on a strawberry, but I can't find my nuts anywhere. Finally, I make it to Brandon, and wake him up.

He is obviously confused and all I can say is "where are the nuts!" He starts looking, and I'm thinking, how does he know that I have nuts?

Turns out, the day before, he had bought a tiny bag of nuts that was €4,25, and had been complaining about how expensive they were. Well guess what, that was the best €4,35, he's ever spent. He hands me the nuts and I kind of start to eat those.

At this point, he's sitting in his bed and I'm on the floor, shaking, rocking, and not looking great. He looks at me and realizes that something is wrong, and now I am starting to freak out.

Let's get a mental picture here. I am shaking, a lot. I'm shaking really, really bad, and my hands, legs, feet, arms, chest and face are all numb. My chest is totally locked and I feel like I have pins and needles on my entire body.

I'm really freaking out, I'm thinking that I'm about to have a seizure and that I will be forever brain damaged. Dramatic, but hey, this was freaky. Brandon, meanwhile, is trying to get me to say what wrong but I have nothing. At this point, I am moving my limbs like a dying cat trying to get the numbness to go away. I am just sure I looked ridiculous!

So he's trying to figure out whether to call an ambulance or what. At this point, I've laid down because i don't want to hit my head if I pass out. Brandon's reading on his phone, and we're realizing that I am having a severe hypoglycemic attack.

Step one, don't panic. Apparently, I tend to get a bit anxious, ha, so I need to try not to have a panic attack.

Brandon tells me that I need to sit up and put my head between my knees to increase blood flow. I really don't want to, but eventually do. It's pathetic, I'm like I can't, I can't, but whatever.

At this point I'm freezing, shaking, and when I put my head to my knees, it is so hot! I sit there for a while, I need to get some juice or something, but obviously I am not going anywhere, and Brandon doesn't want to leave for fear that I'll pass out. Thank God that all the other people who were in the room had left, as this was kind of odd.

Finally, Brandon decides that i am not going to slip into a coma like his phone is telling him that i am going to do, and runs downstairs to get me some sugar! He comes back with orange juice and some weird type of jam. I drink the juice and try to eat the jam, it was not great, and we wait.

Meanwhile, I am still shaking. It was weird actually, seriously, i am sitting on the floor with my head between my knees, covered by a white comforter which is getting stained by the mashed strawberries, waiting....

I have never shakes like that I my whole life. It was like an earthquake in my body combined with the worst pins and needles that you have ever felt. It felt like getting multiple Charlie horses at one time, I was just waiting for everything to cramp up.

However, the whole time, I'm thinking, this is nothing compared to meg... Whoa, she must have been totally freaked in Liberia... But she's crazy and I am not, but props to you meg, way braver than i!

After forever, things began to settle. I can finally feel my limbs again...yes! By this time, it's around 10am and we have to check out at 10:30am. My crap is everywhere, and i still feel like crap, however, it's time to leave.

Somehow, we get it all together and only about five minutes late. We head downstairs to check out.. I of course have lost my key card, and instead of saying that to begin with, i start to tell about how when they gave it to me and then it was no longer there.... makes no sense, brandon rolls his eyes, the guy doesn't care, and we leave. What a morning!

A few minutes later, we're both standing on the street, looking at each other, like, what the heck just happened???

Anyway, that was fun. Nothing like that has ever happened to me before. Still have no clue why it happened, but possible it had to do with the fact that I had only eaten half a sandwich and that was it the day before! Now I have Claire terrified that I am going to pass out from lack of eating... Perhaps I'll have to play a trick on her :) 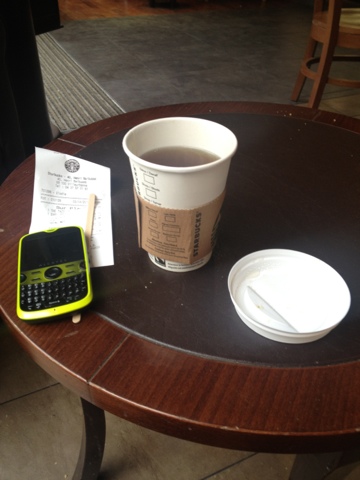 Posted by Brittany Burkhalter at 9:19 AM