As we sit here, I am reading about tax law. Claire is watching Grey's Anatomy, and I am not sure what Brandon is doing.

Here's the recap of yesterday, Friday.

We were supposed to meet Claire at noon in Vichy. Brandon and I were in Montpellier, and Claire was in Paris. We were meeting in Vichy, which is in the middle... at noon.

Brandon and I were doing covoiturage back to Vichy and our ride left at 8am. So we woke up early to head out from Celia's. 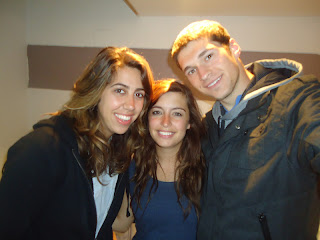 We met up with Sylvan, he was really nice and his car was tiny and French, you'll see it later. Not that he was a bad driver, but he most certainly wasn't going as fast as the guy on the trip down, so the entire trip took about four hours. We stopped halfway for a break. Brandon called it the Wawa of France. 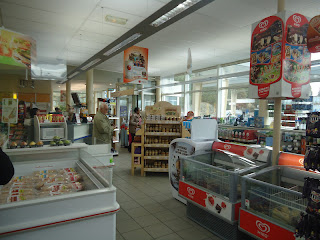 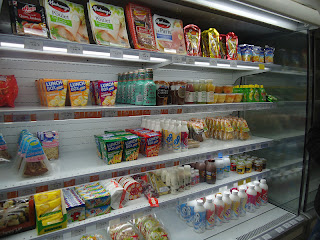 Back in the car, I attempted to take some pictures. Didn't turn out too well. 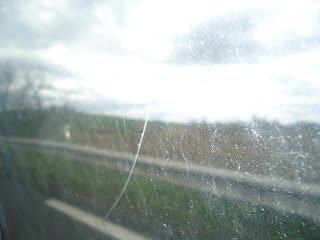 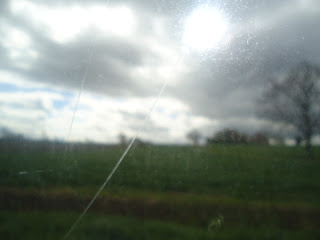 We made it! Only ten minutes after Claire's train too. Sylvan was nice enough to pick up Claire from the gare and take us to Brandon's apartment. Here he is with Brandon, the car, and some of my stuff. 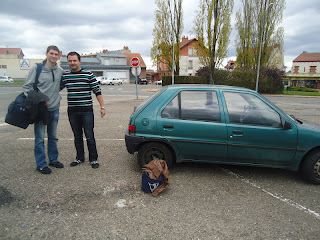 We headed to the gate around Brandon's building, and too our luck, by the way, we're all carrying our lives on our backs, literally, the gate code isn't working! Great. So, we had no way to get in.

Brandon decided to climb the fence and open it from the inside. 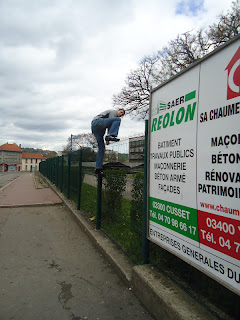 However, halfway over, a woman opens a window and starts yelling at him! "Young Man! ....."

Brandon lives on a high school campus because he is a teacher... and it must have looked like a student trying to break in over spring break! After explaining that we actually live here, the woman informed us that the electricity went out and when it came back on, it scrambled the gate code. She said she called an electrician, but it's France and the weekend, so who knows when they'll come.

So the problem remained, we can now get in, but we can never leave. The lady offered to open it for us until five pm... great.... like that is gonna work. We headed to Brandon's apartment to figure out the situation there. We dropped off our stuff and headed to some office to see what we can do to figure this out.

We found a lady, she's having the same problem, she calls a guy, he says that the gate for cars that uses a beeper rather than a keypad works, and then bam! The guy arrives and hands Brandon a beeper! Problem solved.

Here is getting the beeper! 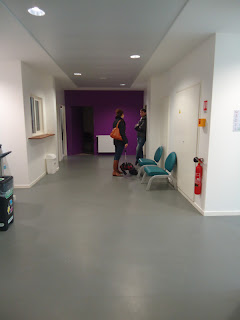 Then, after that fiasco, it was like 1h30, and the only thing that I had eaten at that point was a small bowl of cereal, a bottle of water, and a Mars bar. So, we went to find something to eat.

We planned on eating a small lunch and going to a cool pizza place for dinner, but we saw a crepe place and were drawn in. 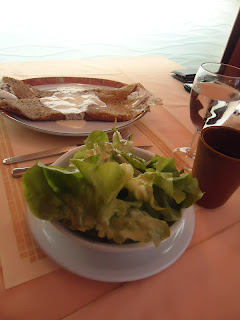 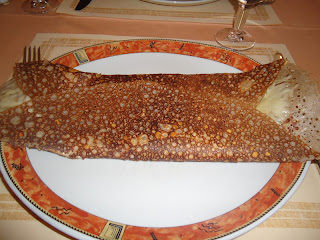 It was so good, however, I was the only one who really liked what I got. As you can tell, the empty plate is mine. 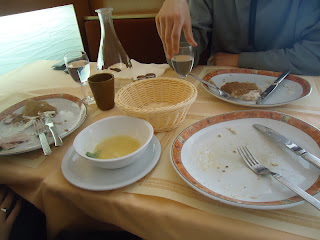 And then came dessert! It was amazing! Enourme! Claire and I shared a crepe with coconut and hot chocolate. 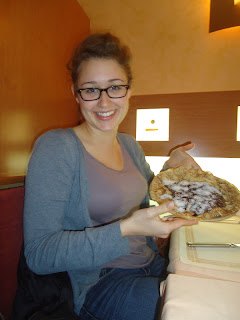 Brandon had a nutella crepe. 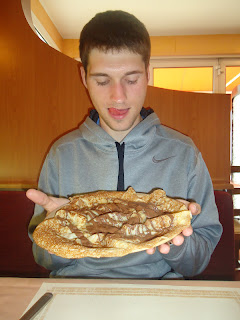 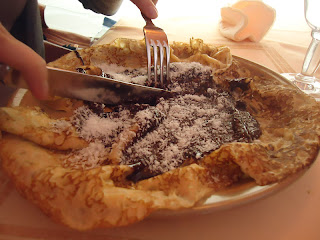 After lunch, Claire was on a mission. She wanted a haircut and her eyebrows waxed. Although Vichy is a spa town, this posed a small problem, as EVERYONE here is old and Claire is young. So, we walked around trying to find a salon filled with young people. Claire made an appointment for her eyebrows at one place and for her hair at another.

This one will do for a haircut. And it's purple! 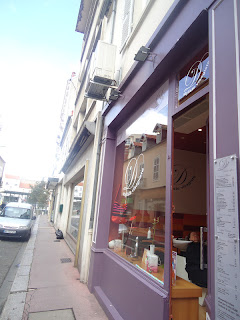 While Claire got her eyebrows taken care of, Brandon and I wandered around.

So, with all this walking all the time, we get tired. Our new favorite hobby is going into stores and trying out massage chairs. We do this so often in fact, that we now know which chairs we like and which are too painful and which do nothing.

We headed to Darty, it's like best buy, as we know they have some chairs, to take a break. So we are sitting in the massage chairs and look up, and it's like this was a sign from God.

A head massager! Brandon has this same one at this apartment, and it was like it had been transported! It was just randomly sitting there. So odd. 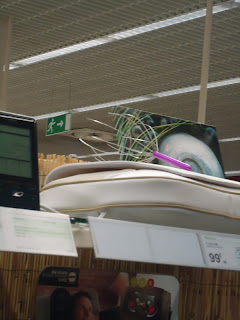 Here were are, in our chairs! 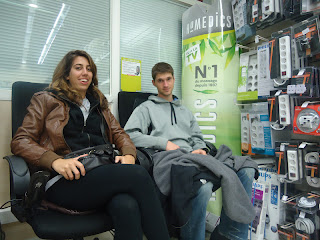 We left and met up with Claire. She was a little red. A few hours later, we would discover these to be open wounds. 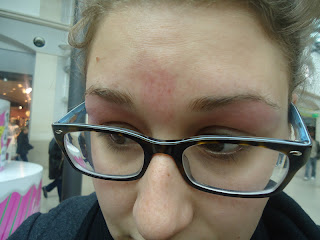 Next up for Claire, haircut, next up for me and Brandon, coffee! Here is my cafe creme. 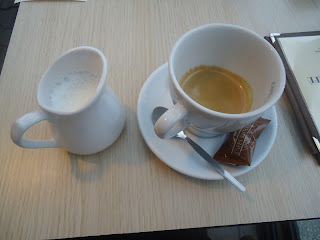 Brandon took this.... it's my reflection. 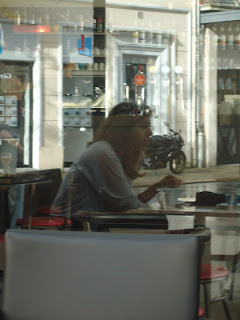 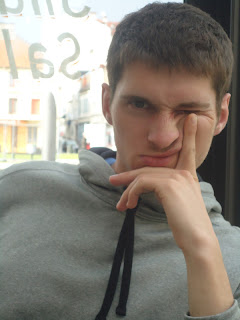 Walking back to meet Claire, we saw this store. Doesn't translate too well. 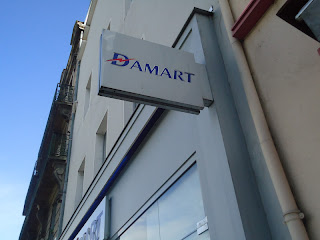 I am not a picture taker usually, not that you would be able to tell. But these days, I take pictures of literally everything. Brandon, Claire, and whoever else I happen to be with at that time has gotten used to it.

So Brandon has become quite the subject. Usually, he is my only subject. He hasn't shaved in a few days, here's his barb! (He is shaving as we speak.) 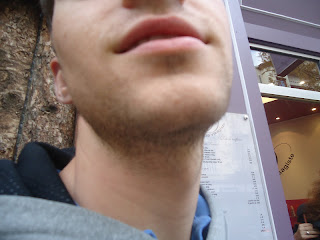 And Claire's new haircut.... she wasn't exactly thrilled with it, but I think it looks nice. 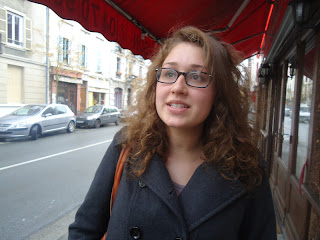 Well, the day is almost over, so we headed back home. Look, an ugly building. 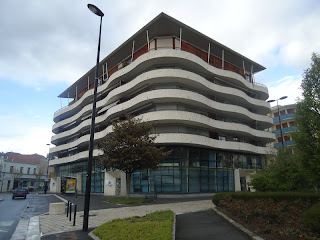 And a nice building. 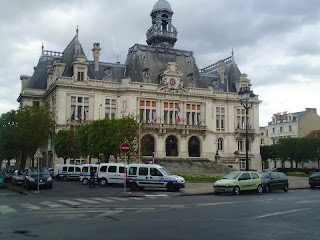 A cool bridge over the gare. 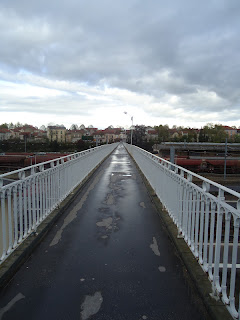 And an encore dinner of vegetable soup.... it's so good! 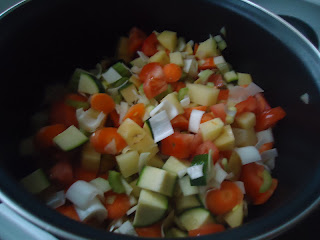 We were all so exhausted and fell asleep early.
Posted by Brittany Burkhalter at 2:17 AM