Today, I am nipping it in the bud. I weighed myself... quelle horreur... and thankfully, am blimping out at 3kg. Probably good as Brandon and I are about to embark on our voyage and I am imagining it will be a lot of exercise with little food. Who knows. I feel like at this point in my travels, I have gotten over the fear of the unknown country and becoming a victim of starvation and malnourishment while I am there. But maybe I am getting ahead of myself.

I've heard this for a lot of people actually.When you study abroad, a lot of time you go for days without real food in the beginning because you have no idea how to get it. That happened to me at least. Now, anywhere, I figure they have grocery stores that you can find food, just like a normal human. Who would have thought. For those of you who are confused by this concept of lack of eating, especially in France, there are not many things scarier than being by yourself in a foreign country where you don't speak the language and and you don't know the culture. You become independent really quick.

Anyway, point being, hopefully, we have some balanced eating on our trip.

Our trip. We've been planning. On May 1st, Brandon and I fly to Prague, after that we'll continue on to Austria, Slovenia, Croatia, and Hungry, and we'll be back in France May 23. Should be fun.

Today, is another slow day around here. Which is just fine. Can't be having crazy adventures all the time. I limited myself to one bowl of Special K this morning and for lunch, Brandon made macaroni and cheese with broccoli. It was delicious. He also used most of the milk so that will help me contain my cereal addiction.

Speaking of milk. In France, they ultra pasteurize (UHT) almost all of their milk. So in the grocery store, it's all unrefrigerated. If you want refrigerated, fresh milk, you have to buy it organic. I would never buy the UHT milk, it grossed me out, I would always buy fresh. But Claire and Brandon drink the unrefrigereated kind so that is what I have been using. I got over my gag reflex, but to be honest, it doesn't taste like anything. It's like a tasteless white liquid that softens your cereal. It doesn't taste bad, but it doesn't taste good either. It's just bland.

A reason why people buy the unrefrigreated kind is because it's cheaper, or so I thought. I was looking in the grocery store the other day, and saw that the cold vs the not cold, was a difference of 20 cents. I asked if you we could get that one, Brandon was like, "okay, but why?" We got it and oh my god, it is so much better. After weeks of drinking white liquid this milk tastes like candy. It was so sweet and fresh and cold. It made me love milk... and I don't really like milk to begin with.

The not fresh stuff 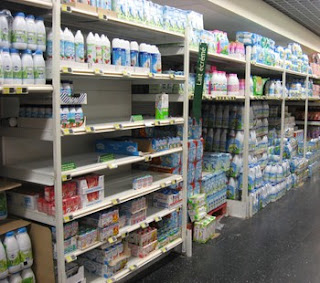 I just looked it up, apparently, a lot of people don't like it! 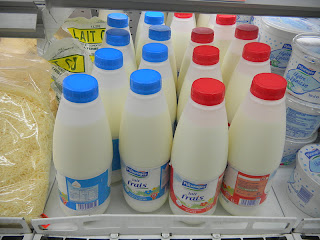 Other than milk, not too much is happening in Vichy. I have been reading a bunch. I am dying to buy myself a kindle when I get home. It is the perfect American companion, allowing you to read a few pages of one book and then quickly switch to another, without having to do the work of lugging a sack of books around.

Get this, I borrowed a kindle from a friend in Hawaii to take on my trip. And all I can thing about is getting home to buy the lighter one because this one is "heavy." I need some work, that is ungrateful. But seriously, Thank you so much Suzi for the library of 80 books, Amanda for offering to loan it to me, and Jay for driving it me, all to get this kindle into my hands. I am obsessed.

Any book suggestions? I am about to finish The Reason for God. Up next is On The Road, Dupes, The Poisonwood Bible, White Noise, and Water for Elephants. But I have a feeling that those will go by pretty quick. The Reason for God is dense slow reading for me, it's taking a while.

Other news in France. The presidental first round elections were this past weekend. It's down to Sarkozy (conservative) and Hollande (socialist). According the news polls, it seems like Hollande is going to take it. When I ask around though, everyone says Sarkozy. I guess that we'll see.

Today, Brandon worked in the morning, had a lunch break, and then worked again in the afternoon. For lunch, we made macaronni and cheese with raclette cheese! So good! I am not sure if you have ever had raclette you most certainly should. It is a really smelly cheese, but it has a super mild flavor. It comes from the Savoie region of France, which is near Switzerland, and it is basically the opposite of fondue. Instead of a melted pot of cheese which you dip things into, you melt the cheese and then pour it over your vegetables. 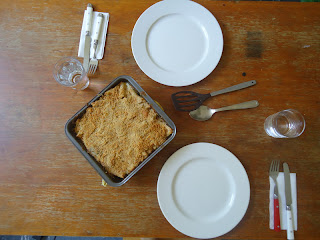 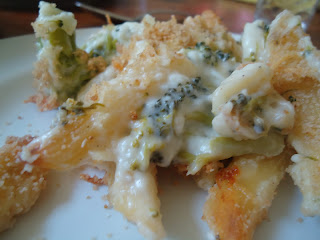 Brandon went back to work, I mutzed around, and then around four, we headed into town for a drink. Ahh soo good today! And finally! The sun came out! I had a tea. What is great about ordering tea here, is that they bring you a teacup and a teapot. So one drink really turns into two, or three, or four. I find that so much more satisfying that an espresso, which is done so quickly. What kind of fun is that? I had an eclair and Brandon had something from the gods! It was dark chocolate with a vanilla creme center. Amazing! 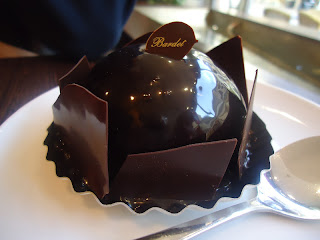 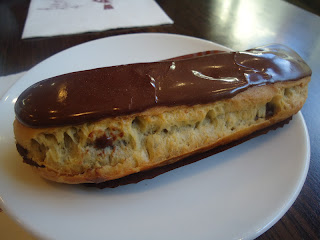 We then walked over to carrefour to get some milk. I do have to say, we had an interesting discussion today comparing milk preference to religion.... that was intense. (Way over my head but don't tell.) I must be the most annoying person to debate with, I feel like half of the time I make no sense!

Brandon, you're killing me. Tonight for dinner, we are having curry chicken. The guy has no problem with salmonella! and at the same time, I just found out that another one of my friends got engaged on facebook. The combo set me into an outrage. Then Claire called in the middle which only got me more worked up about the chicken! Brandon!!!! Chicken safety! But in the end, no one died... and the food smelled amazing, and I am sure that Kaitlyn Gleason will have a wonderful life living in Denver with Davy. I thought her dream was to move to NYC....

So for dinner, we had chicken curry. It was quite spicy but really good. I tried to counteract the spice by sprinkling mine with some sugar. It helped a bit. Additionally, I drank a ton of water. At least by the end I was well hydrated.

Sat down for some emails and reading. Really making that push to finish The Reason for God. Tomorrow is On the Road. I have a six hour train ride to Belgium so we'll see what kind of dent I can make in it. I have already read the first 50 pages and am in love with the writing style. I would kill to write like that. As for content, not far enough yet.

I am heading to Belgium tomorrow to see the Malones! Super excited, just hope that I hear my alarm to wake up! Otherwise, ticket fiasco part II would ensue! Did I tell you about part 1? Also, I realized that I forgot to mention that we almost died, both of us this time, again. Or at least we would have lost our legs.

Anyway, until tomorrow!
Britt
Posted by Brittany Burkhalter at 4:24 PM