It's All About the Food and a Few Other Things I Guess Too! 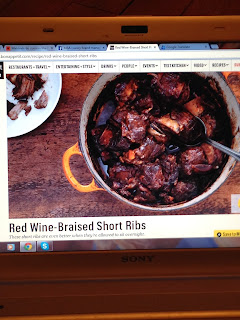 And then I died.

So, as you many know, the title of my program is blah blah blah blah blah, food and wine. So I was thinking, well shoot, I bet a bunch of these people would enjoy drinking wine. And, as you may know, my place is a big larger than the postage stamp I was expecting.... 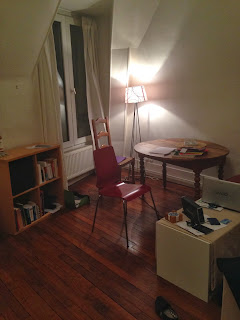 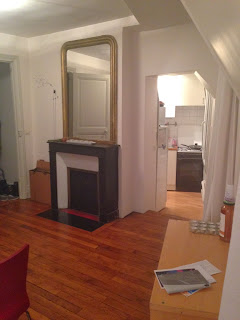 So I had the space.


Also, the people in my class are extremely nice and fun. So, food + space + fun peeps = why not? So, introvert that I am, decided to invite some people over.

I'm telling you, I am in go mode these days. You wouldn't recognize me. Anyway, I thought that it would be fun to continue my weekly happy hour in France, however, I didn't call it Happy Hour mostly because here, Happy Hour is completely different. It is like, the total opposite actually. So for the US, Happy Hour is when bars and restaurants lower their prices so people come at weird times, right. Well, here, they do happy hour during peak hours. Like Happy Hour is 7-11pm. Not cocktail hour. So I guess technically, since we were eating dinner and not having cocktails, I unintentionally did French Happy Hour. Oh boy. Anway, that was a fun short for you.

So I decided to invite people over for wine sharing, pairing, and food.

Then I went crap! Who the heck invites people over for food when you are in France! Enter Table nerves. My god.... PANIC!

And so the food expedition began.

Here are three more key pieces of information that you need to make this story more worthwhile.

1. Everyone, or at least a lot of people, dream of moving to france, buying fresh vegetables from the market, so on and so forth.

2. I have been living in Kailua which while great, islocated on O`ahu, an island, with very limited anything. So for example, if I wanted to make short ribs in Kailua, it would depend on if they actaully existed at the moment on the island. Also, there is no such thing as a butcher in Hawaii. The luxury of going to the butcher and asking/ordering whatever, the kind of meat I want, doesn't really exist.

3. I am incredibly shy when it comes to speaking French. I have to constantly remind myself that the whole country is here to help me practice and I shouldn't feel bad about sucking.

Alright... so first task on the list.... buy short ribs. Now, how do you say short ribs in French? Anyone, anyone? Yeah, exactly.

So here, their cuts of meat are totally different. Like the place on the animal where they cut is completely different. So finding equivalent meat cuttings is sometimes difficult. I spent almost an hour scowering the internet looking for how the heck one would say short ribs! Finally, Google Books saved my life by letting me (illegally?) read a short section of Julia Child's, The Art of French Cooking.

And there lay the word....Plat de Cotes.

Next step... find them! So I was supposed to be waiting for my electrician becuase I hadn't had light in my bedroom for almost two weeks, but the Plat de Cotes were calling me to find them. I ventured out, going right at my mom's suggestion, and after three butchers, I found them!

Found them meaning I awkwardly walking into the butcher shop, cutting in front of a zillion people to glance into the meat cases. Anyway, finally, it was my turn, I ordered the Plat de Cotes, in kilos which was another feat, (no amount of Grey's Anatomy or weighing myself at my dad's office will ever get me to understand kilograms) and then also asked him to cut them into 5cm pieces. Another conversion that I was quite proud of.

Well, I paid, they bagged them up, and I walked out of that place like a smiling idiot. I was literally drooling I was so happy! I had just met my sterotype and had bought fricken meat from a butcher in France to have people come over to my appartment in Paris. Really, not trying to rub it in at all, just trying to convey the emotion.... I was pretty stoked.

So then I proceed to walk around for a while on cloud nine, but then it was time to get down to business.

It was Saturday, and apparently, these things are better if you make them the night before. 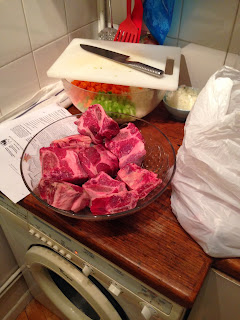 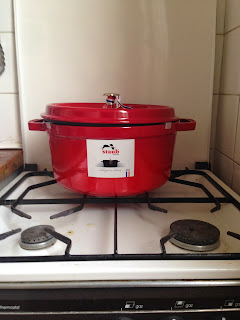 Hopefully this would be a success. Or at least hopefully, I didn't kill anyone. 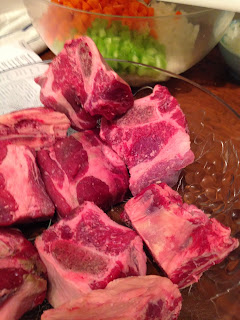 Step One: Season and brown. Let me say something about my stove/oven combo. The thing gets freakin hot. Like I can boil water in less than a minute. First time I have ever been able to brown meat like I wanted. 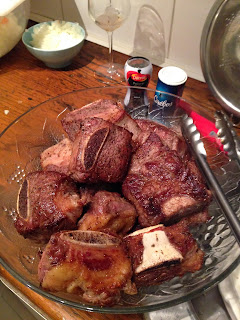 Let's talk about this next picture. Blurry! Surprise, hadn't eaten that day and my hands looked like I had just seen a ghost and went skydiving at the same time. Could not keep them still! 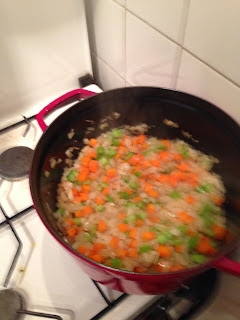 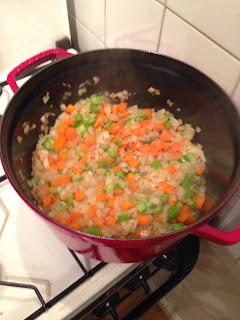 This does not look atll that appetizing! But it's just carrots and celery and onions. 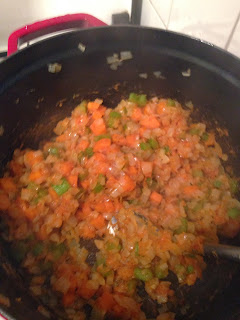 Carrots plus celery plus onions plus one bottle of red wine plus the short ribs. All in the giant pot. 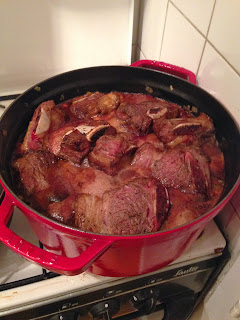 Plus herbs plus some beef broth. Boil and bake! 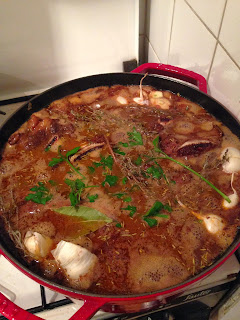 Which was actually terrifying and I got a really bad burn on my thumb and forefinger (they blistered! first time!) because I was being stupid. While the stove is super hot, the oven is less amazing. One, it doesn't have any temperature guage, it's old so it just has numbers one through nine. What I didn't mention earlier was that after buying the short ribs, I once again neglected my call to wait for the electrician and ventured out looking for an oven thermometer. I went to SIX places, it took the whole day and nothing. I was so frustrated.

Anyway, my burn and the oven. Obviously, the 5 kg of short ribs with wine and broth in a cast iron pot is extremely heavy. Well, when i put it in the oven who's temperature I was guessing was around 350, the rack slipped out of it slots and the whole thing fell on the bottom of the oven. Nothing really spilled too much, just some liquid, but obviously, I had to take it out and rearrange things.

So, this is the dumb part and I have kinda done this before and told myself to never do it again. Well, I did it again. NEVER USE A WET DISHTOWEL TO TAKE THINGS OUT OF THE OVEN. SO DUMB! Anyway, the water in the dishtowel super heated and then in turned burned two of my right fingers. Ahhh it hurt!

But the important part was that I rescued the food, right! I hate dropping food! Such a waste. Anyway, I macgyvered the oven to that I could get the pot to stay eleveated, and left it to cook!

I tried one around midnight, I was pretty good, but a little fatty, something I knew would be true but it still made me nervous. The best thing was that they were tender. So I was winning that battle.

The next day, Sunday, the big day I got nervous. (This is so The Table mentality.) So what does one do, she goes and stalks another butcher.

I won't admit to it, but maybe just maybe, I bought a backup piece of meat. What?! I had to have something to pair with the big red that was being brought! 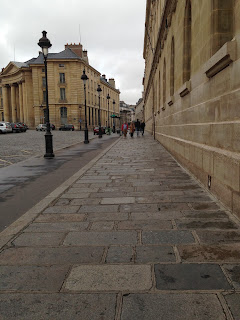 So after the backup meat, it had nothing to do. So I was like hmmm. I promised American food, lets go check out the American grocery store. The metro that I would ride to get there was down so I walked. 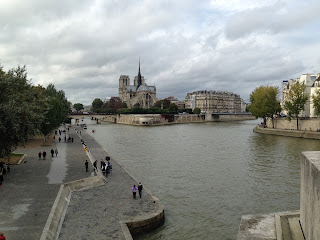 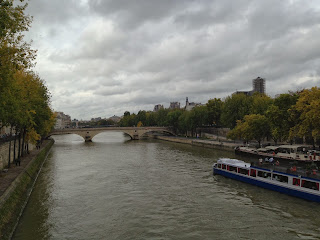 I get to the American market and what is the first thing I find!  Ahhhhh! Kill me now! 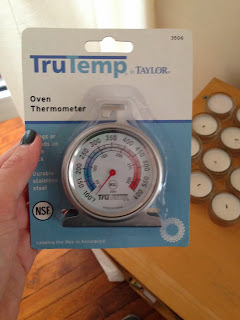 Hung out in the American store for a while trying to decide which enourmously overpriced American food items I wanted. Finally, settled on Reece's Peanut Butter cups, the oven thermometer, and then I saw it! Grits and cheddar cheese! Way better than my inital plan of mashed potatoes for a side dish. (Also a way better idea because I wasn't so sure about the milk and cream in my fridge because when I finished cooking the short ribs the night before, I did let them cool a while, but I had to put them in the fridge before I went to sleep. The heat from that had kinda hmmm lowered the temp of my fridge!)

Cheddar Grits it was going to be!

So all this and I am sorry to say that I don't have any pictures of the final products, the people, the food, the wine, nothing. But I can say that is because we had so much fun, who needed a camera. But really, everyone brought something and I was like a well oiled machine.

Listen to this meal!

Start with a Sancerre white wine (which I had never had but had been dying to try). Add cheese from a far off region of France that someone's mom brought while visiting for the weekend. Add some rolled procuitto and artisan french bread. That was round one.

And that was Sunday night. Not bad at all!

I feel like I should add some space so you can still enjoy that meal. The next stuff is just kinda random. 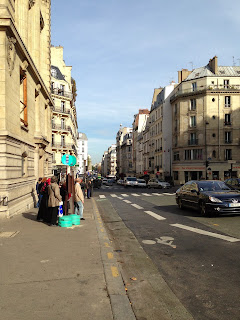 A lady wearing a cat skirt. Totally could be Lauren, right. 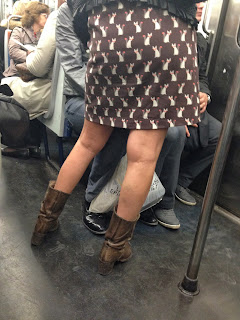 This place needs some decorations like you wouldn't believe. A decoration that is not my mess would be nice. 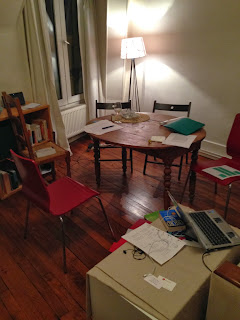 I went and read for a little while in the park. 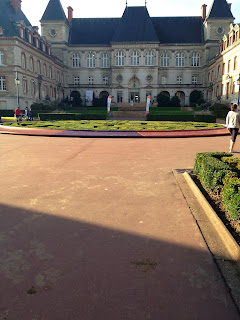 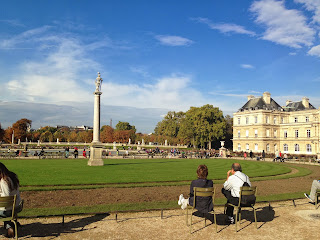 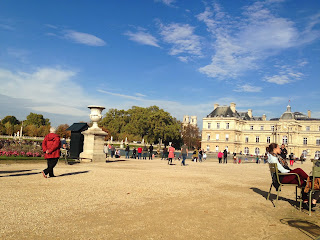 And then I got hungry... so I made soup. I had one onion left over from the night before and that terrible Diane de Poiters wine. 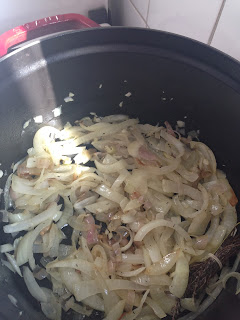 Guess what, I found what Diane de Poitiers wine should be used for. 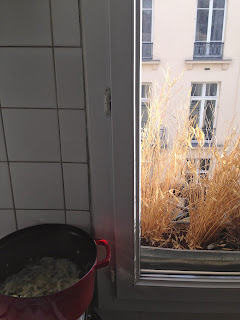 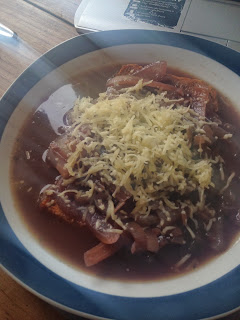 And then I had to move everthing out of my bedroom to the living room because the painters were coming to fix the plaster. 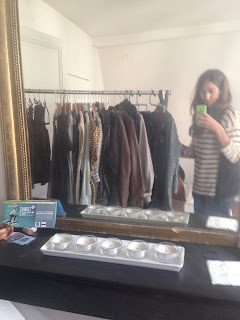 See ya!
Posted by Brittany Burkhalter at 2:13 AM