The Start of "The Great Adventure!"

Here is the recap on what's been going on. I have tons of pictures and I am trying disparately to catch up. Right now, Brandon is reading about Croatia, we're eating Oreos, I'm blogging, and we're listening to Parisian music. One thing that we have learned about ourselves on this trip is that France has rubbed off on us just a bit. Brandon more than me as he has been living there for the past year.

So, flashback...it's Monday night. We spent Monday running around Vichy trying to get our various stuff together... mailing things, cancelling phone plans, buying a backpack, making copies of keys so that we can live in Brandon's apartment illegally when we get back... you know.

We made it through it all and around 11pm we got around to packing. 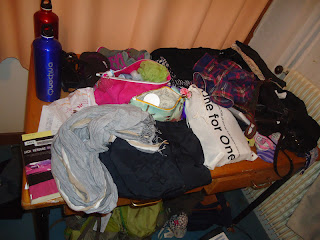 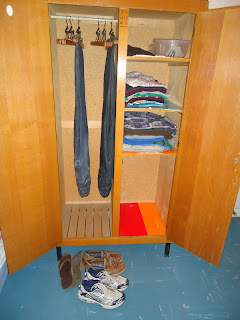 Just so you know, our bags weigh exactly the same if I take out my computer. 12kg. Here's are our final packs! 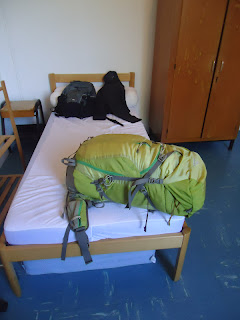 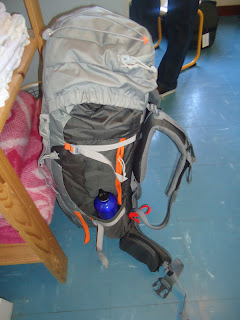 And we're off! We actually did stay up kind of late the night before but we were so excited! Brandon's roommate offered to drive us to the gare. So nice as Vichy chose this day to be hot! 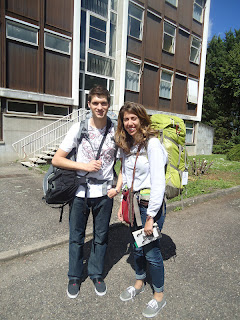 We made it to the gare. We were meeting up with a friend of Brandon's as she was going to join us in the Czech Republic for the first few days. Her name is Johanna. Everyone say hi, she'll be here for a few days. Johanna is great, she's super hilarious and will do anything. Perfect person to be in a country where you don't speak the language at all.

Case in point. Johanna offered to take a picture of us. These two men were in our picture. (We're in France by the way). And she yells to us in English, "Do you want me to ask them to move." They understood, I think, and laughed, and then stayed in the picture. It made it more authentic. 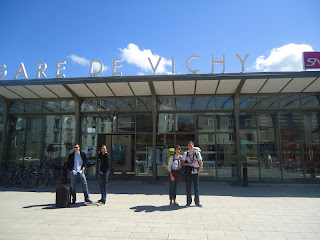 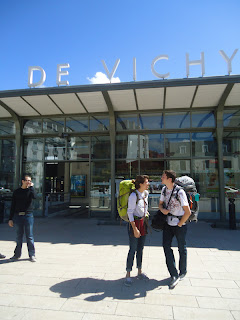 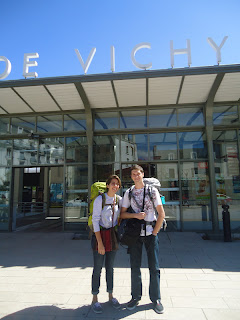 Our train came at 1:30 and we were off! Get ready.. Brandon has been trying to perfect his European smile. We rode the train from Vichy to Lyon. On the train, we started to brush up on our Czech. She had written down in her notebook how to say hello, goodbye, thank you, and I'm a vegetarian. All good things. We gad lunch at the train station, directed a man to the Post Office, and then hopped on a tram to go the Lyon Airport. 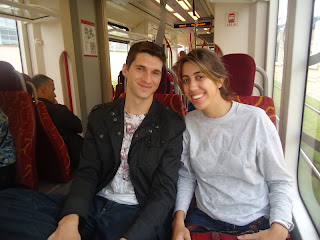 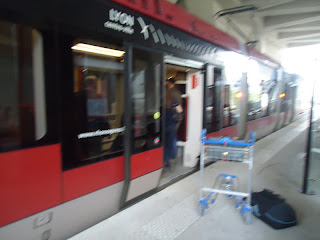 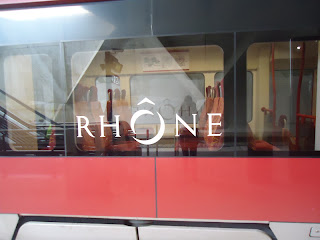 At the airport, we obviously headed to our gate. Elevator picture. Here's Johanna. 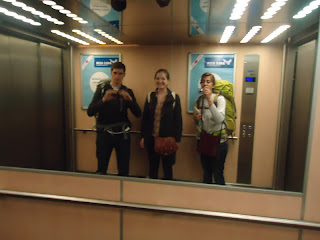 So we were flying EasyJet. It's cheap but literally there are no frills. Our terminal looked like a Home Depot, with orange color and all. Security was close to a joke, but we did see this sign which made it all worth it.

Do you see what it says? Look closely. 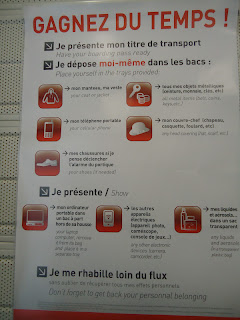 And here are the trays... I don't think that Brandon will fit.... maybe I will. 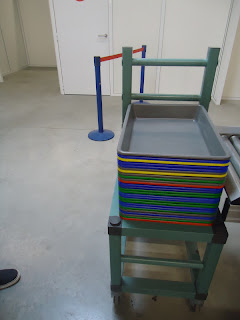 Brandon accidentally left his razor in his bag.. but it made it through! Yep, I feel really safe. Then we were really early for our flight, so we took a coffee break.

This is literally the hottest coffee that I have ever had. I could not drink it for like 20 minutes. Johanna however, downed it no problem. Apparently she can tolerate the heat. 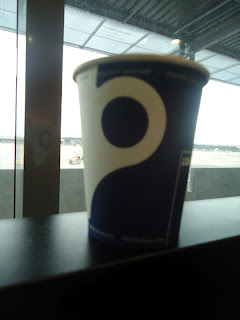 Ah yes... this was great. The receipt conveniently converted the euros into dollars for me... ugh! That was expensive.... but delicious. 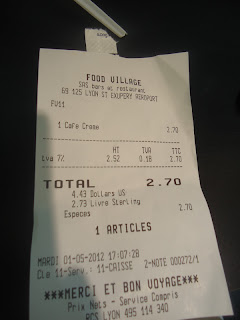 Okay, so back to talking about no frills. So we are waiting for our coffee and then over the loudspeaker, they announced that our gate was loading. There are no assigned seats so everyone begins to run for the gate. You get to the gate and then form a huge line, which you then feed into what is basically a large pen. So there are a plane full of people, waiting in a pen, until a man comes and unlocks you, and then everyone runs for the plane. I am not kidding. It's crazy. 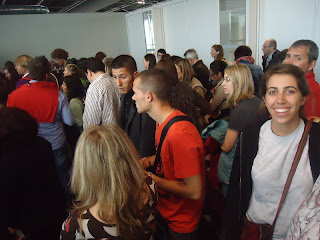 Johanna was not messing around. She won and scored three seats together. She only had to take down one flight attendant to do so too. 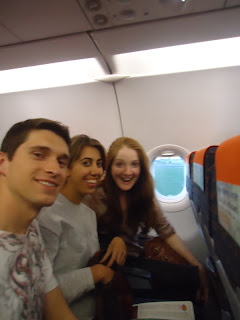 And we were off! It was about an hour and half flight. I was a bit creeped....it's really casual, but it's a British airline so everything was in English... except for the flight attendants ability to speak English. We heard a lot of things, but really not many words that we recognized. Oh well.

Prague here we come!
Posted by Brittany Burkhalter at 12:03 PM