So, I am eating well. My nails are growing really quickly and my hair is shiny. There is no way that I am lacking any sort of vitamins. I am getting plenty of protein, fruits, vegetables, dairy, and carbs. In that order too. So obviously, my hips are seeing that. That's cool. But something that I did just notice.... my legs are ripped. You should see my quads, they are almost in volleyball shape! Ready for stage II of my adventure! I can't believe it's already here!

Okay, that was two days ago. Brandon and I are leaving for our "Backpacking Adventure" tomorrow so the budgeting has begun. More so than was already in place... times are scary. Brandon, La Machine, has been calculating, and we are budgeted to within an inch of our life, every cent accounted for.... which is great for me,... I just spend what he spends, don't have to face my bank account, and I know i'll be in budget. We're a great team.

But, before all this can happen, I must, must tell you about my days in Brussels.

First off, things I learned:

On Friday, Caroline and Mrs. Malone took me to another part of the city called Sablon. It was a cute area with restaurants and shopping. There was also a neat park with beautiful flowers.

This picture is for The Colonel... construction! 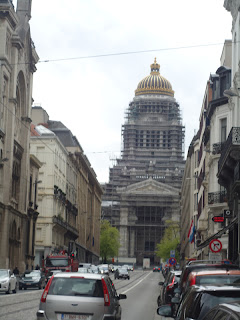 Here's the park. Apparently, if you walk on the grass, a man blows a whistle at you and tells you to get off. So it's more of a looking park than a fun park. But I still had fun.... I always have fun. 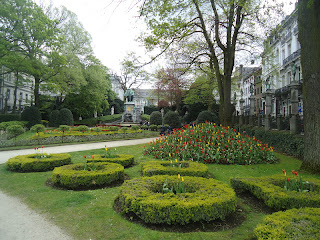 A church across the street from the park. Maybe i'm just oblivious, but it seems that Brussels has a lot of churches in it. 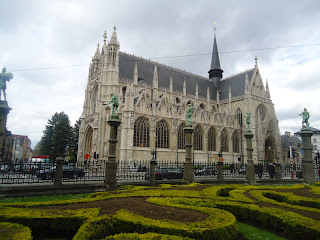 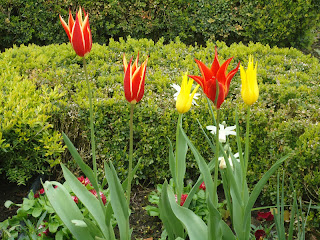 A fountain in the park. So in this park, there are tons of statues of people who were at one time, very important. Obviously. Ha. Anyway, if I can remember right, this guy was guillotined. 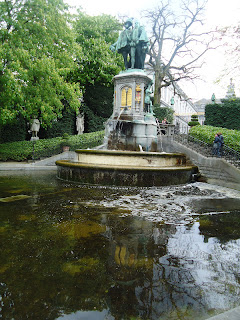 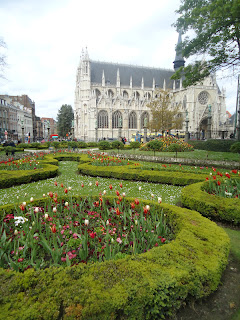 And this guys apparently, was a basketball player. Look at the size of his feet! 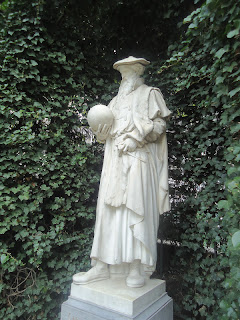 After the park, we were hungry so we headed over to SushiShop. So, I was like sure great no problem, I'll get chicken, they have chicken sushi there. But, that wasn't an option. After a 5 second moment of hmm, I jumped in. And you know what! Finally, finally, finally, I enjoyed it. Thank you Kelci Komori, Uncle Scott, and Malone's.

I had a citrus carrot salad (really good), and my sushi box (I think it was salmon rolls with avocado wrapped in rice paper with mint, doesn't that just sound good and pretty, and then these salmon and tune things), rice, Perrier, and sweet shoyu. It was really good. But I never understand how people can eat so much sushi? I get full so quickly with all that rice. 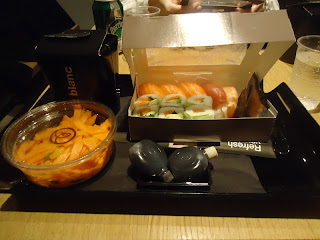 Later down the street, we found cool door knocker for Milds. 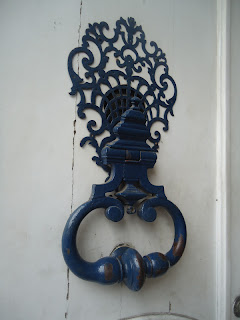 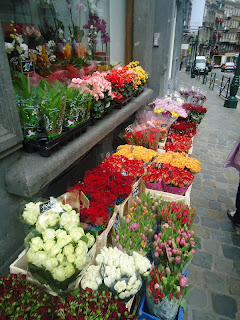 Okay, so this was day two of searching for a waffle truck. We tried two place where they usually are... nothing. Then, we saw one at the top of a bunch of stairs. Yay! So we headed over. But I swear, it was a mirage. By the time we made it to the top of the stair, it was gone! Gone! I think that I must not be destined to eat one! Guess i'll have to come back.

We grabbed the bus and headed home. Here is heading back to the Malone's house. There are cherry blossoms blooming on their street so pretty. 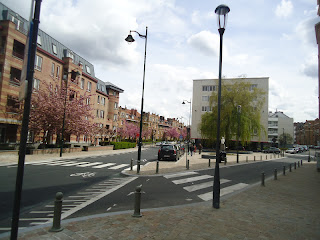 The Malone's have several great shops really close to their place, one of which is a butcher. We were having lamb burgers for dinner so Caroline and I were charged with going to the butcher and seeing if they had any ground lamb. The key component for any lamb burger. We went in and asked... he told us to come back later that evening.

We headed back to the house. Chilled, chatted, and then Mr. and Mrs. Malone and I strolled out for the burger meat. We went to a cool wine shop and saw a bit more of their quartier.

Those burgers were amazing! We topped them with tzatziki sauce and feta....um yes! And then Mrs. Malone made a roasted vegetable orzo..... um yes! It was delicious.

Posted by Brittany Burkhalter at 1:25 AM