So, after much anxiety... and I do mean much, it begins again.

Leaving Hawaii has not been easy and it's not because of its natural beauty but mostly because Hawaii was easy and Paris is hard. (See how I side stepped all that emotion.)

Anyway, I spent last week getting ready to leave for France, for those of you who don't know, I am going to grad school in Paris. Thank God, my best friend Lauren for some had a few free months in her life and was able to come with me. Seriously, I would probably be a puddle if I had to do this on my own. So Lauren and I took off, Friday morning from Honolulu headed to Paris.

With the exception of my wayyyy overpriced ticket, this may be the most that I have ever spent on an airline ticket, must be karma for all my past flight deals, the trip was not bad. One stop in LA and then Paris.

First flight was fine, a bit bumpy, which in my mind translates to "OMG I'm going to die! (I hate to fly.) Either way, Honolulu to LA is a quick 5h13 minute trip. Lauren slept and I watched Grey's Anatomy, my new obsession on my other new obsession, The (Work) iPad. Work bc it's my dad old iPad that I used to use for the table.

Anyway, the flights almost done, we're landing. To be honest, landing is my favorite part. It means the flight is over, your closer to the ground, and it just feels more controlled than random turbulence. However, I have one big fear of landing.... not including the newly produced one of low air speed that was created last month with the Asiana flight, but I digress. My fear came when I saw Natalie Portman on Jay Leno like 8 years ago. Yes, I have a great memory.

Natalie was flying into New York, the plane was about to land, something happened and then the flight had to take off suddenly. Now, talking about this doesn't seem that bad, but when I heard that I thought I would die if I was ever on a flight that did that.

Can you guess the next part of my story.

So Lauren is a corpse next to me, and net to her is this Army man in cammies. We're landing, we're landing, we're langing, and then we are NOT landing. No, instead we are shooting straight up into the sky like a spaceship. To be honest the verticalness of the angle was actually quite impressive. So of course, I being to freak out.... and where does my mind immediately and logically go? Well of course we are going to nosedive into the ocean! LAX is right on the water, we've now shot up an impressive amount up and over the Pacific, and of course the only place left to go is in.

This may shock you, but instead we just circled the airport and tried to land again, this time successfully, about 15 minutes later. We touch down, people clap, and Lauren wakes up. I don't remember exactly what she said, but it was something like, wow, it's nice that they are clapping because it was such a great flight.

Me and Army man quickly corrected her.Turns out, right when we were about to land, another airplane pulled out onto the runway we were landing on we had to pull up. So that was fun.

The we had to wait on the tarmac and then finally we got off that plane. The waiting wasn't great because on our next flight, Lauren and I didn't have seats together and we were trying to get to our next gate as soon as possible. We had a two hour connection and I will give you a hint, it took the full two hours.

LAX is already confusing enough, but one really annoying thing is that to change terminals, you usually have to leave security, and today was not exception. After making it to the line, a battle between Lauren and a girl from an eastern block country who kept cutting in front of us on the corners, which Lauren took as a personal challenge, serveral paparazzi trying to photograph who we would later find out was Tom Welling, we made it it our gate and learned that there was no way to change our seats. So we boarded.

Well, apparently everyone wanted to change seats to it was mad chaos on the plane. I switched twice, Lauren three times, and finally, this really nice guy next to me traded with Lauren! Yay! 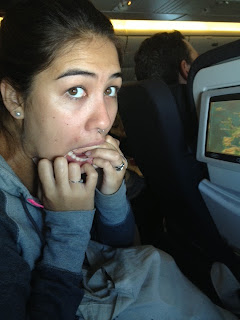 Thank you church for the headphones! They are AMAZING! 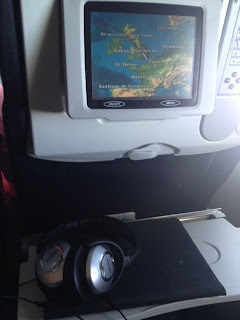 Photo of Birmingham, England from the plane. 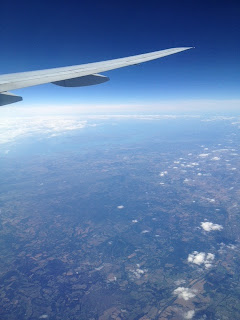 So, the flight was bumpy. And actually bumpy. Like really bumpy. But I think that its always pretty rough when you fly over the Atlantic, at least it has been for me in the past. We land, are the first people through customs and head to baggage claim where all of our bags come, including my giant one, except for my one black one. Excellent. 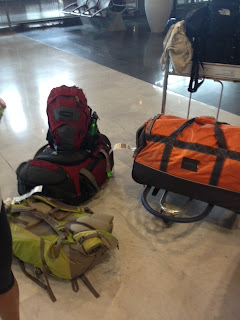 Turns out it was in the oversized baggage place,not exactly sure why. We loaded it all into a taxi and head for.... the storage unit! Currently, I have no where to live, so everything but that green backpack is going into storage.

We hit up the storage unit, I do it all in French! Yeah baby, the man in incredibly nice, the place is huge, awesome! We metro to our hotel, which turns our is in this awesome and incredibly cute neighborhood, the hotel is awesome, and we got have a drink. I wish I had more picture but I don't.... tom morrow.

We walked around, ate dinner, then we died. SO much in one day! And now I write to you at 6am from my bathroom, as Lauren is sleeping, with this view 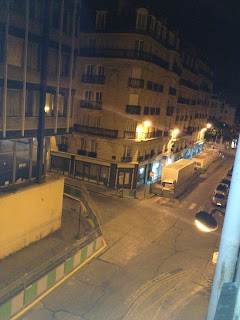 Posted by Brittany Burkhalter at 9:31 PM