Guess what?! I am in Japan! My church has been forming a relationship with a group of pastors in Tokyo and decided to send a few of us other there to check it out, meet everyone, and start being their friends. And at the last minute, I got asked to fill in for a guy who couldn't go. So it was off to Japan!

I have never been to Asia before so this I obviously was/am super pumped!! So here are the details.

On the Japan trip was Nathaniel, Matt, MaryAnn, and me. MaryAnn is a flight attendant for United so the plan was for all of us to fly standby with her... that was a good choice.

We got upgraded. Oh yeah! Great way to start the trip! MaryAnn was riding cool in first and and Nathaniel, Matt, and I "slummed" it in business. Slummed! Let's just say, I survived.

Here is me, chilling in my seat. 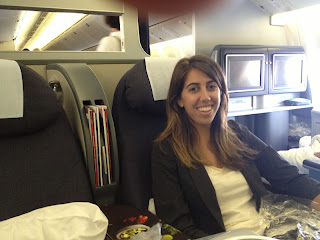 Ah, yes, my feet resting on the foot rest. Loving this pod thing. And yes, of course, duh! The seats were lie flat. I'd had such a hard day, basically I of course needed it. 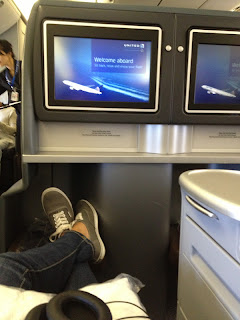 So MaryAnn told us to pace ourselves with the food. I thought she was exagerating... she wasn't. Nathaniel put it like this, "I feel like a Kobe cow, you sit in a really nice area and people feel you, and feed you..." We are a lot and we ate well!!! 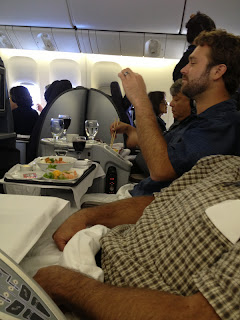 So we started with warmed nuts.... and champagne. Then came the appetizer. Caprese salad, shrimp cocktail, and some sort of sushi roll. I had a lovely bordeaux. 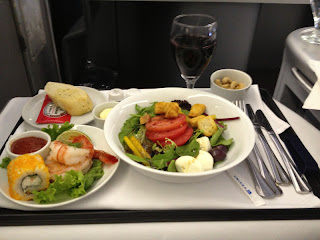 Then the meal came and I stopped taking pictures. I had beef tenderloin with gnocchi and green beans, followed by a cheese platter with port, and then ice cream. I was really packing it in because i was definitely filled to capacity!

Here we are demonstrating the lie flat seats. I think the seat was more comfortable than my own bed. 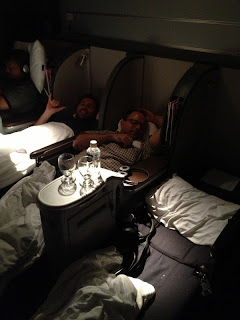 I tried to watch Rock of Ages... it sucked! Then I rewatched the first half of the Katy Perry movie. Then I tried to sleep. Then it was time to eat again.

Omg! I have to say, for me, this is the perfect breakfast. Yougurt (which was actually good because yogurt usually makes me nervous, meat, meat, cheese, fruit, croissant with a tiny jelly container. It was great. 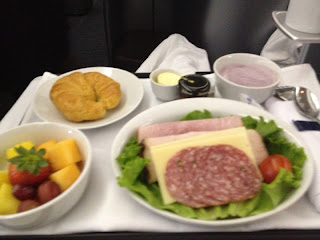 So sadly, after 7 hours and 19 minutes, we had to get off the plane. We all wished that the flight would have been longer but what can you do. There is still Japan.

So here is our plane. It was very good to us. 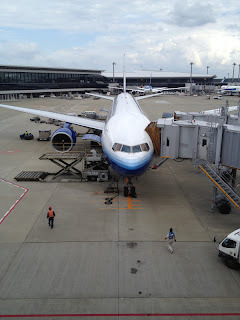 And then we made our way into the airport. Pretty standard airport I guess but  I have to say, not super foreign looking. Headed over to customs, I got to go in the pregnancy line... hmm, but I did get through first! We grabbed all of our bags.... we have like 13 I think. 8 checked and 5 carry on! and headed to buy train tickets.

I need to say this. I love getting to a new place, having no clue what you are doing, and then trying to figure it  out. I hate doing this while carrying 200 pounds of stuff. We had two hundred pounds of stuff.

The line for train tickets was super long and you couldn't bring your cart, with our thousands of bags, inside, so we just left it all alone outside. Which was super cool! As we keep learning, Japan is rediculously safe. No one would ever dream of taking, or doing anything like that! Really cool and people are crazy polite. I'll try to get some pictures that demonstrate this.

So from Narita Airport to Tokyo it's about an hour by train and two hours by car. We took the Narita Express train. Great train, great way to see the countryside. And bam! we were suddenly in the Tokyo metro system. 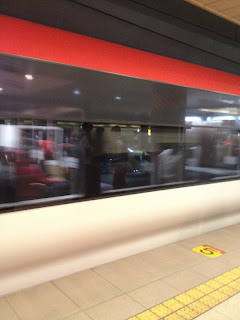 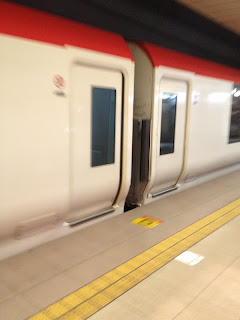 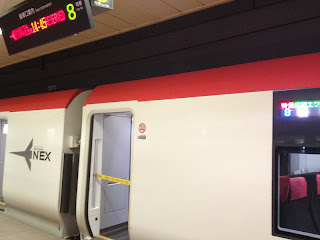 And then the fun began! (I'm leaving... more later)

Posted by Brittany Burkhalter at 4:40 PM