So today was the most boring day that I have had all year... haha. It reminded me of the jour ferriers from when I was in France, because everything is closed and it is too cold to go outside, so you end up sitting around doing nothing. And while it wasn't "too cold" today, it was raining and overcast and dark, which partly I liked because the cozy weather is a welcome change from Hawaii's ever so sunny disposition, but that combined with everything being closed left me with about nothing to do. I was even more irked by the fact that the TV was on, playing the umpteenth day of college football. I am so done with that I cannot even say.

I woke up with terrible shakes....love it! Insert emergency eating here. Acai naked juice, glasss of milk, bowl of cocoa krispies with milk, whole wheat waffle with strawberry jelly, and cheddar cheese. I debated going for an english muffin with cream cheese and several strips of bacon after that but I thought I was good. I was also full.

After that fun, I tried to read and that occupied me for a good hour. And then I was immediately bored again.

Hopefully, the kitchen would come to my rescue. It did somewhat. (Currently I am having trouble typing as the grease on my hands from the day is now being passed from my fingertips to the keys... great!)

Marisa has been requesting the Pioneer Woman's Minestrone Soup for a couple days and yesterday, Milds and I had picked up the ingredients for it, so why not make it on this start to the boringest day of the year. I personally am not a huge fan of minestrone... essentially is vegetable soup that I don't really like. But I made it anyway following here colorful blog pictures in hope of the perfect recreation. Even with a new over and extra time, I couldn't get me zucchini to blacken like hers.

Soup done... it looked pretty good. I had a taste, not bad. Would recommend to all minestrone lovers. Perhaps use a bit less pasta than she calls for as the elbow noodles I used took over the fifty pounds of vegetables that were already overflowing in the pot.


And then there was a lull.

My mom and is always trying to get me to use what we have. And what we had was a lot of left over ingredients that we never use. Carrots, celery, half opened bottles of almost sour red wine. Mix that with the two pound of fat and meat trimmings from my beef bourgignon last week and I was on my way to making my very first batch of beef broth. This turned out to be a killer idea! 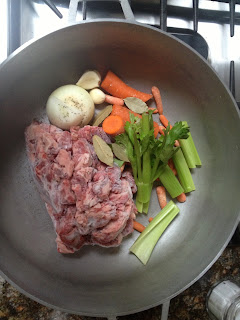 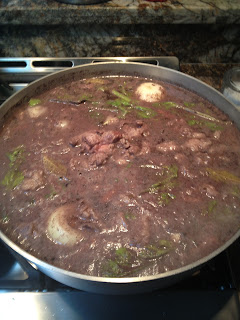 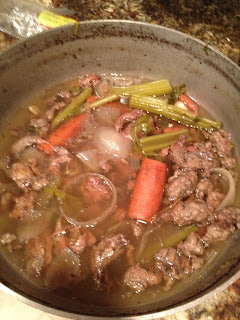 So epic and it smells amazing! We should all be making our own broth!
Posted by Brittany Burkhalter at 12:54 AM